Tough training has paid off for Penistone Leisure Centre’s very own Amy Darlow who has scooped a gold and silver at the Special Olympic 40th Anniversary Games. 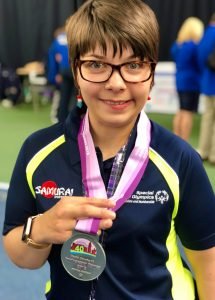 Amy, age 24, who has cerebal palsy, epilepsy and learning difficulties, has been playing boccia for five years and supplements her squad training with individual training here at Penistone Leisure Centre, where she works as a voluntary receptionist. You may have noticed her boccia court marked out in the sports hall!

Boccia is like a giant game of boules with competitors sitting on chairs or in wheelchairs and trying to get their six balls closest to a jack. Amy travelled to Stirling University with three of her Sheffield team mates to take part in the games where she picked up a silver in her individual match and gold in her doubles with team mate Sam Hindley, from Sheffield.

“I felt very proud that I had been chosen to take part in the Games. Every day was a long day. We had to get up at 5.30am for breakfast and didn’t get to bed until after 10pm,” said Amy.

“I normally feel nervous before playing matches but once I get over it, I feel relaxed and start to enjoy it. Playing boccia is my favourite activity. I really love it. It makes me feel happy. I like trying new things. I’m quite adventurous really!” she added.

Amy lives in Penistone with her mum, step-dad David and brother Ross and also studies, goes horse riding, attends the gym and is a member at Penistone Gateway Club.

Amy’s mum Amanda Greenhough, 49, said: “I am immensely proud of Amy, she is our ‘Boccia Queen’. Amy has been disabled since birth, being diagnosed with cerebral palsy just before her first birthday. From a young age, Amy has always shown tremendous determination and has never let her disability stop her from doing anything. Growing up with one older and one younger brother, she would join in their games of football, cricket and tennis in the back garden. She always had to be in the middle of whatever was happening.

“Amy appears to be a natural at playing boccia, winning a gold medal at her first ever competition! That was almost five years ago and boccia has taken over her life ever since. She has played matches all over the country, from Worcester to Scotland. Playing boccia benefits Amy in 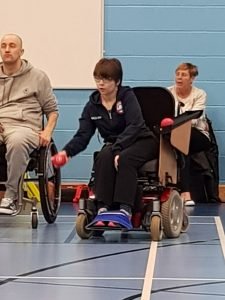 so many ways. Her confidence has grown enormously.”

Amy, who trains twice a week in Sheffield and here at the leisure centre, and once a month with the Boccia England Academy, has her future sights set high.

“I would love to compete at the Paralympics! So I need to keep training hard. Monday night training starts again this week after a summer break. Over the next few months we will be playing League matches with other local teams, including Chesterfield and Nottingham. I will also be competing in matches in Liverpool. The next big competition is the BE cup when I hope to come away with a medal. I have reached the final of this competition every year that I have competed. I only missed one year when I had hip surgery so could not play,” said Amy.

This site uses Akismet to reduce spam. Learn how your comment data is processed.